Low-dimensional (super)conductors at low temperature or high magnetic field are a fantastic playground for experimentalists. Our research activities aim at unveiling new quantum phenomena related to 2d superconductivity, quantum localization, and quantum Hall effect. We are currently focusing on:

Electron interferometry with quantum Hall (QH) edge channels in semiconductor heterostructures can probe and harness the exchange statistics of anyonic excitations. In this work we show that high-mobility monolayer graphene constitutes an alternative material system, not affected by charging effects, for performing Fabry–Pérot QH interferometry in the integer QH regime.

This Review Article summarizes recent progress in understanding of the

various pathways that lead to the destruction of superconductivity by the interplay of disorder, localization and interactions, including experiments in low dimensional materials and application in superconducting quantum devices.

We unveiled a new interaction-induced topological phase in the zeroth Landau level of graphene. This phase is insulating in the bulk and exhibits a pair of spin-filtered, helical edge channels. It emerges under moderate perpendicular magnetic field when graphene is placed in proximity to a high-k dielectric substrate. In this work we demonstrated a remarkably robust quantum spin Hall effect that withstands up to 110 K over micron-long distances which opens a new avenue for spintronics and topological superconductivity.

The search for experimental evidence of Majorana modes is an area of intense research in condensed matter and quantum physics and uncovering clear evidence is complicated. We investigate the impact of Joule heating which can influence the analysis of experimental features related to Majorana bound states in topological Josephson junctions.

Strongly disordered superconductors in a magnetic field exhibit many characteristic properties of type-II superconductivity—except at low temperatures, where an anomalous linear temperature dependence of the resistive critical field Bc2 is routinely observed. Here we report systematic measurements of the critical magnetic field and current on amorphous indium oxide films which show that the Bc2 anomaly is accompanied by mean-field-like scaling of the critical current. Based on a comprehensive theoretical study we demonstrate that these observations are a consequence of the vortex-glass ground state and its thermal fluctuations.
B. Sacépé, J. Seidemann, F. Gay, K. Davenport, A. Rogachev, M. Ovadia, K. Michaeli, M. V. Feigel’man Nature Physics 15, 48-53 (2019)
See also CNRS press release: http://www.cnrs.fr/inp/spip.php?article6274 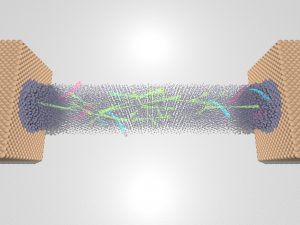 Pinching off electron edge-channels in graphene 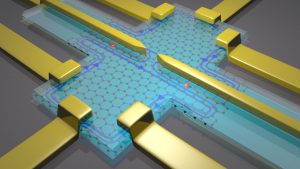